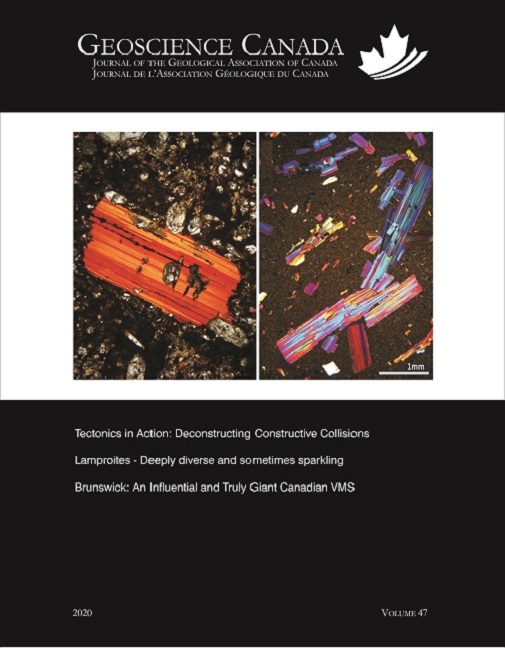 In the Bathurst Mining Camp (BMC), 12 of the 45 known massive sulphide deposits were mined between 1957 and 2013; one was mined for iron prior to 1950, whereas three others had development work but no production. Eleven of the deposits were mined for base metals for a total production of approximately 179 Mt, with an average grade of 3.12% Pb, 7.91% Zn, 0.47% Cu, and 93.9 g/t Ag. The other deposit was solely mined for gold, present in gossan above massive sulphide, producing approximately one million tonnes grading 1.79 g/t Au. Three of the 11 mined base-metal deposits also had a gossan cap, from which gold was extracted. In 2012, the value of production from the Bathurst Mining Camp exceeded $670 million and accounted for 58 percent of total mineral production in New Brunswick.
Base-metal production started in the BMC in 1957 from deposits at Heath Steele Mines, followed by Wedge in 1962, Brunswick No. 12 in 1964, Brunswick No. 6 in 1965, Caribou in 1970, Murray Brook, Stratmat Boundary and Stratmat N-5 in 1989, Captain North Extension in 1990, and lastly, Half Mile Lake in 2012. The only mine in continuous production for most of this time was Brunswick No. 12. During its 49-year lifetime (1964–2013), it produced 136,643,367 tonnes of ore grading 3.44% Pb, 8.74% Zn, 0.37% Cu, and 102.2 g/t Ag, making it one of the largest underground base-metal mines in the world.
The BMC remains important to New Brunswick and Canada because of its contributions to economic development, environmental measures, infrastructure, mining innovations, and society in general. The economic value of metals recovered from Brunswick No. 12 alone, in today’s prices exceeds $46 billion. Adding to this figure is production from the other mines in the BMC, along with money injected into the local economy from annual exploration expenditures (100s of $1000s per year) over 60 years. Several environmental measures were initiated in the BMC, including the requirement to be clean shaven and carry a portable respirator (now applied to all mines in Canada); ways to treat acid mine drainage and the thiosalt problem that comes from the milling process; and pioneering studies to develop and install streamside-incubation boxes for Atlantic Salmon eggs in the Nepisiguit River, which boosted survival rates to over 90%. Regarding infrastructure, provincial highways 180 and 430 would not exist if not for the discovery of the BMC; nor would the lead smelter and deep-water port at Belledune. Mining innovations are too numerous to list in this summary, so the reader is referred to the main text. Regarding social effects, the new opportunities, new wealth, and training provided by the mineral industry dramatically changed the living standards and social fabric of northern New Brunswick. What had been a largely poor, rural society, mostly dependent upon the fishing and forestry industries, became a thriving modern community. Also, untold numbers of engineers, geologists, miners, and prospectors `cut their teeth’ in the BMC, and many of them have gone on to make their mark in other parts of Canada and the world.