The Origin of Fog:
A Labrador Inuit Folk Tale

SECTION I: THE TEXT AND ITS COLLECTOR

1 REVEREND ALBERT MARTIN (1861-1934) published the text of this Labrador folk tale under the title "Inuit Folk Tale about the Origin of Fog (Labrador)," in the October 1901 issue of a Moravian magazine of missions devoted to children.1 The magazine, Aus Nord und Süd (From North and South), displays on its cover name-plate in the pious style of the late nineteenth century two images that illustrate its title: Inuit children, representing the North, stand in front of the Hebron church and mission house, which is bounded by sod houses and resting dogs, and African children, representing the South, sit in front of their house in Nyasaland (Malawi). The children face Jesus, depicted as the Good Shepherd, with the biblical verse from John 10:16 at Jesus’ feet: "And there shall be one flock and one shepherd."

2 The translator who communicated this folk tale from Labrador Inuttut to children in Germany was the Moravian Superintendent of Labrador, who with his wife Lydia Oelmann (1864-1939) spent 35 years in Labrador, from 1888 until 1923. Superintendent Martin resided in Nain until the outbreak of World War I, when the German citizen and Prussian consul for Labrador turned over his administrative ecclesiastical duties to his British colleague, Walter W. Perrett. All nine of the Martin children were born in Labrador. From 1914 until his return to Germany, Martin served the Hebron Church. There he ministered when the devastating Spanish Influenza epidemic of 1918 ravaged the community.2

3 Martin had succeeded the Reverend Theodor Bourquin (1833-1914) as Superintendent of the Labrador mission and, like Bourquin, who published a scholarly Labrador Inuktitut grammar, belonged to a new generation of superintendents who had been academically trained.3 Martin was a professional teacher and had learned Greenlandic in Germany, hoping that he would be called to service in Greenland. His linguistic preparation, which included training in phonetics, eased his learning of Labrador Inuttut and enabled him to learn quickly to speak and write the language. Throughout his tenure in Labrador, Martin worked on biblical and other translations into Inuttut, including the Moravian hymn book and liturgies that are still being used in Labrador today.

4 Martin also revised the Labrador Inuktitut curriculum for schools by emphasizing teaching relevant to the children’s experiences in Labrador. In mathematics, for example, he counseled "not to have the students always count with mere numbers, but to pose lively, applied problems." Martin recommended instead of the simple addition problem 4+5+6=15the following example drawn from real life: "Into the bay there come 3 sleds. The first is pulled by 4, the second by 5, the third by 6 dogs. How many dogs are coming?" "It is my experience," the pedagogue wrote, "that our Inuit children apply themselves much more industriously to such problems and thus count faster than if one operates merely with numbers."4

5 To enhance teacher and leadership training, Martin instituted teacher training courses in Nain, the Inuktitut lectures of which are still today preserved in Labrador. To improve communication and retain the language, Martin established in 1902 a printing press in Nain, which published a magazine with religious and secular articles in Labrador Inuttut, titled AGLAIT ILLUNAINORTUT (Leaves For All). Two small German book publications by Martin are of particular significance for Labrador and Inuit Studies, Das Leben des Labrador-Eskimo (Life of the Labrador Inuit)5 and Die Bibel und unsere Eskimo (The Bible and our Inuit).6 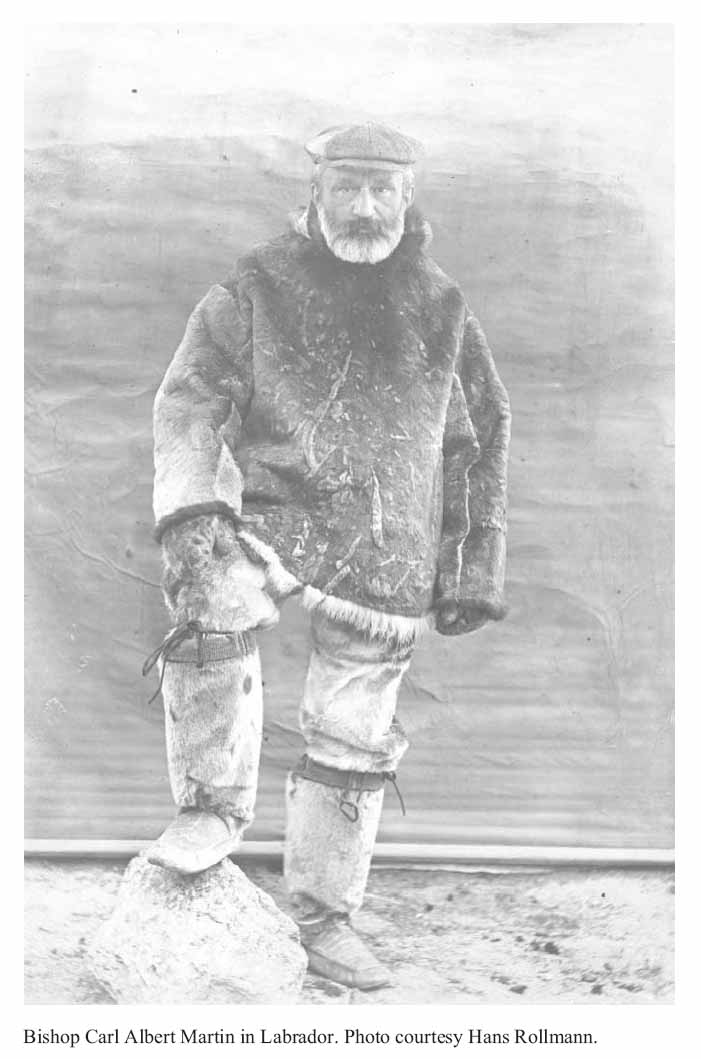 6 Once, a man went into the forest to get firewood. While he was working in the forest, he was attacked by a black bear who wounded him badly, so that the man fell to the ground as if dead. The bear sniffed him to determine whether he was still alive, but the man held his breath, so that the bear believed the man to be dead and put him on his back to carry him off into his cave. On the way there, the bear came with his load through thick bushes. Intending, if possible, to escape, the man grasped the twigs of the bushes so that it might appear to the bear that his burden had been caught by the bushes and left behind. The bear, of course, looked around, and the man quickly let go of the twigs and would once almost have fallen from the bear’s back. The man could not find any convenient moment to escape and the bear happily brought the prey into his cave.The exertion had made the bear tired. He threw himself on the lair and fell asleep. The little bears that cavorted in the cave thought that their father was still watching, and when they saw that the human, whom father bear had just deposited in the cave, opened his eyes, they called out to the sleeping bear, "Father! Father! Look, the one you just brought us is opening his eyes!" Drowsy, the old bear replied, "Even if he now opens his eyes forever, he has already given me enough trouble today," and continued to sleep.Then the man jumped to his feet, pushed the little playing bears aside and rushed out of the cave. Mother bear was standing outside cooking. The man threw her also to the ground and fled. He came to a river, which he waded across. Now he was safe! In the meantime father bear was awakened by his family and ran angrily after the escapee. He came to the river and saw the hunted man on the other side. "How have you been able to cross the river?" the bear asked the man. "I drank it all up," he answered. The bear immediately started to do the same. He drank and drank and drank, until he burst. Then, for the first time, thick fog covered the land. A. Martin.7

7 The folk tale that Martin published in German is in one form or another common to Inuit across the Arctic and has been recorded from the Canadian Northwest to East Greenland. Notably Knud Rasmussen and Franz Boas published versions of it in the reports of their expeditions. Depending on which themes and features of the story are emphasized, the form of the tale can either be classified as an etiological or origin myth or as a hero’s tale. In several instances the two forms mingle.

8 The Labrador story falls into the first category as an explanation of how fog originated and has perhaps been muted in its violence because of the intended audience, children, by the editor. Yet the basic narrative that it shares with similar Inuit tales elsewhere remains intact in Martin’s version. In the story, a man is attacked by a bear and then taken for dead and carried into the bear’s cave, from which he escapes but is followed in hot pursuit by the bear. The man tricks his pursuer into drinking the river the man has just crossed until the bear bursts and gives rise to the often-present natural phenomenon of fog. Specific elements of the story are so fixed that they can be found in all versions, such as the attempt by the pretended corpse to wear out his snatcher by holding on to bushes on the way. In the Labrador version, this action is depicted as an attempt to escape, but because of the bear’s vigilance the man succeeds only in tiring him so much that he can escape later. The intended eating of the victim is absent from the Labrador account, although it may have been originally part of the story because of the wife’s cooking outside. Also the escape is less violent than in some versions, where the body snatcher and even his children are killed and the impending fate of the victim is described in greater detail. Whether such muting of violence is a consequence of editorial modifications by Bishop Martin in view of his audience can in the absence of other Labrador versions no longer be determined.

9 Among the Inuit of Cumberland Sound in Nunavut, not a bear but Nareya, a huge man of immense appetite, killed a caribou hunter and snatched his body. One heroic friend of the killed hunter, an angakok, had himself buried, to be snatched out of the grave by Nareya. Pretending to be dead, the man who was about to be cooked by the bear’s wife for dinner, escaped and was pursued by Nareya, whom he slowed down with a variety of obstacles by his shamanic arts, including a river. When asked how he had crossed the river, the pursued hero advised Nareya to empty the river by drinking all the water, which he did until he burst and a mist arose.8 In this tale it seems that not the origin of fog is the focus of the story, but the heroic actions of the angakok in tricking and killing a monster who endangered hunters.

10 This casting of the story as a hero’s tale is also recorded by Knud Rasmussen among the Iglulik Inuit, where the enemy is a voracious body snatcher who with his family consumes the bodies of the dead. The hero who had himself buried and snatched from the grave possesses also shamanic abilities to raise obstacles in the path of his pursuer. The person giving pursuit, however, is not the body snatcher, whom he killed along with his children during the escape, but his wife, who is now tricked into drinking the river and bursts as fog rises from her dead body.9 In this version, the origin myth occurs intertwined with the hero’s tale and is highlighted in an emphatic last sentence by Ivaluardjuk, who communicated the tradition to Rasmussen, including the comment that "people say from that time that the air usually becomes foggy." There is also a clue in the wife’s "shaking herself" before she bursts that led Rasmussen to conclude that the "body-snatcher and all his family were bears in human form," with the wife taking on her real form when pursuing the enemy.10

11 Most developed in its features is a story found in the posthumously published notes of Knud Rasmussen from East Greenland, titled "The Woman who was changed into Fog." Here a father tried to find out why the bodies of children were taken from their graves and has himself snatched by the grave robber. As in all cases, the prey is taken to the family of the body snatcher, only that in this version the choice body parts that the children covet are described in great detail and the killing of the "man-eater" is recorded with violent specificity, as is the chase by the woman and the obstacles raised in her path by the pretended corpse before she reaches the river. The fur trailing in the water of the bursting woman/bear is an added detail. In this story, too, the hero’s tale is combined with the origin myth when the woman’s death causes a "fine rain" to fall and "that is how the fog came." An added feature is the subsequent death of the man-eater’s children, "who had wept so violently that the snot hung out of their noses down to the ground, and thus they had died."11