A Study on the Motivational Mechanism of Creative Situations

Using the organismic dialectical metatheory and the empirical research approach, this study systemically explores the relationship between creative situations and creative behavior. The study finds that the opinion proposed by organismic dialectical metatheory, that needs and motivation mediate the situation and the behavior, is true. Also, support from leaders and the richness of resources are primary components of creative situations. Furthermore, the satisfaction of self-determination and competence is at the core of creative activity; enjoyment is the direct cause for creative behavior, and pursuit of challenges is the most important indirect cause.

1 A creative situation is defined as the perception of the circumstance that influences the organizational creativity (Amabile, 1997). Motivation is generally considered to be the individual inherent mental process led, stimulated, and kept by the goal or internal motive force (Pintrinch and Schunk, 1996), which is often differentiated in the creative research field by two types: intrinsic and extrinsic motivation (Amabile, 1999). In recent years, researchers have started to examine the effects of motivation on the relationship between the organizational environment and creative performance. But most of these studies are done within the frame of cognitive evaluation theory, of which there are already many criticisms. Many people think it is difficult to define the so-called environment of "information" and "control" (Eisenberger and Cameron, 1996). Thus, we need some new theories to explain the relationship between the organizational situation and creativity.

2 In recent years, with the development of studies on motivation, there appear to be many new ideas about intrinsic and extrinsic motivation. The most representative and influential one is the self-determination theory (Deci and Ryan, 2000). As the theory develops further, organismic dialectical metatheory tries to use the concept of psychological needs to integrate different opinions in the area (Deci and Ryan, 2000). This theory proposes that there are three kinds of psychological needs which are inherent, universal, and common in human beings: self determination, competence, and relationships. When the environment satisfies these three needs, it will support intrinsic motivation and promote the individual’s behavior. Valle-rand (1997) puts forward a casual model to explain the relationship: social factors- psychological mediators- different kinds of motivation- results.

3 Though organismic dialectical metatheory is meaningful to creative study, there is no experiment under its direction in the field of creative behaviors. There are three purposes for conducting this study. The first is to take the organismic dialectical metatheory as a framework and to establish a new model of motivational mediation between the organizational environment and creative performance. The second is to distinguish the types of needs and motivations in order to explore the path between creative situations and creative performance using Covariance Structure Analyses. The last is to examine the relationship among the mediators.

4 Samples are employees and their supervisors from Beijing and Jiangxi province, who are 689 in total. The number of male participants is 355, and the other 334 are females.

Figure 1: A casual model of the relationship between creative situations and creative performance 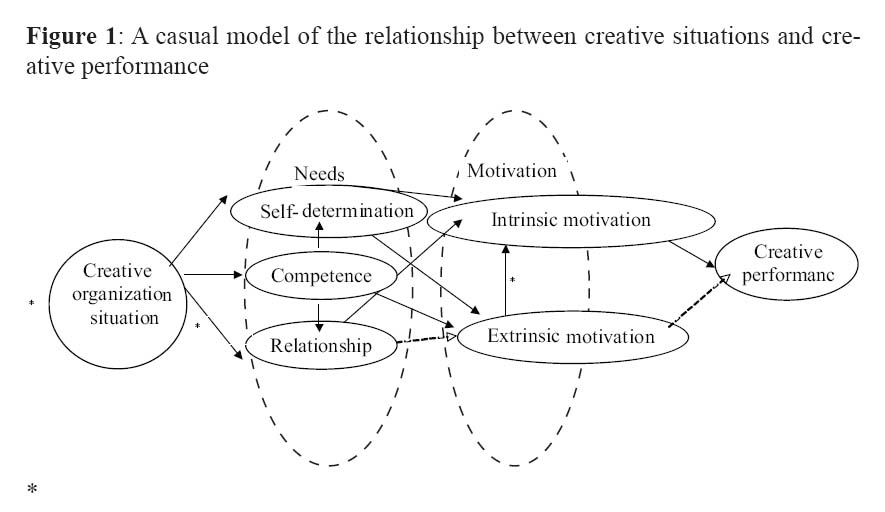 The questionnaire of creative situation

6 The questionnaire was designed by Zhang Jian (2003), and is used to measure the situation that can influence creative performance in organizations. There are four factors on the scale and 40 items. The Cronbach’s alphas of the scale are 0.8589, 0.8135, 0.7930, 0.5440 respectively, suggesting good stability among the four factors.

The questionnaire of the satisfaction of psychological needs

7 The questionnaire is used to measure satisfaction of the three kinds of psychological needs, which is adopted from Nikos Ntoumanis (2001). The scale has three factors and 15 items. Its stability and validity have been verified.

The questionnaire of motivation in employees

8 The questionnaire was designed by Zhang Jian and Guo Dejun (2003), and effectively measures the motivation of employees according to five factors: self-determination, pursuit of challenge, good relationship, evaluation from others, and out-reward. A factor of enjoyment was added into the scale, because many studies point out that this is important for creative motivation. The questionnaire includes 6 factors and 36 items. The Cronbach’s alphas of the scale are 0.6356, 0.8275, 0.5860, 0.6624, 0.7327, and 0.5465.

The questionnaire about creative performance of employees

12 Covariance structure analyses were performed. As recommended by Byrne (Byrne 1998), several procedures for all covariance structure analyses, presented in the paper, were followed: LISREL 8.02 was used to conduct the analyses; the input data was a variance-covariance matrix; one item per concept was fixed at 1.0; a simple structure was maintained; the phi matrix was set as a free symmetric matrix; and the delta was a diagonal free matrix. The result is shown in Graph 1 and Table 1.

Graph 1: Verification of the casual model with needs and motivation mediating the relationship between situation and creative performance 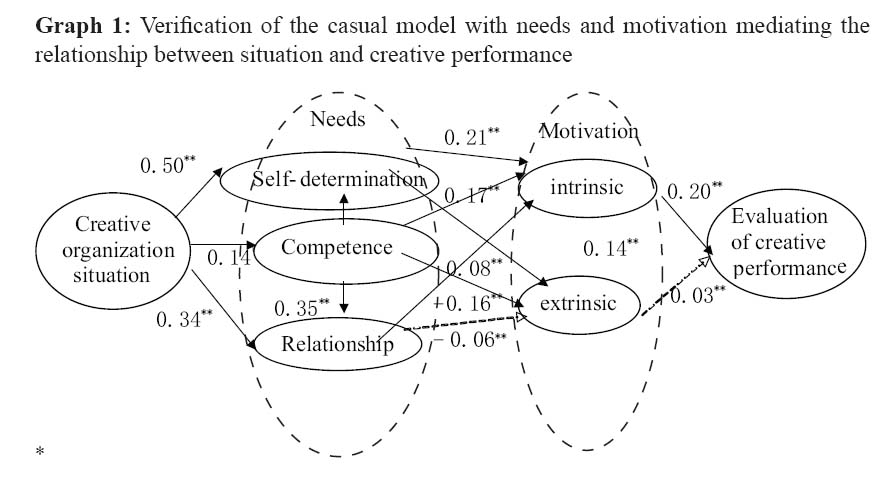 Table 1: Verification of the casual model with needs and motivation mediating the relationship between situation and creative performance

14 The exploration function of the covariance structural analysis was adopted to confirm the essential feature of creative situations. The samples were randomly divided into two groups. The numbers are 467 and 464 respectively. A path exploratory study was performed on one sample, and it got the following structural model in terms of the theoretical feasibility and data result emendation, shown in Figure 2 and Table 2.

15 This model has a good fit index, shown in Table 2. The variance of the model account is 11%. While using the other samples to verify this model, it was discovered that the fit index decreases slightly, but in the accepted scope. It was proved that what is found from exploration analysis is reasonable to some extent. When all of the paths were carefully inspected, 5 paths that were not significant were found. Such results show that the suggested model is sometimes reasonable, but needs further exploring.

Figure 2: Exploration of the influence of creative situations 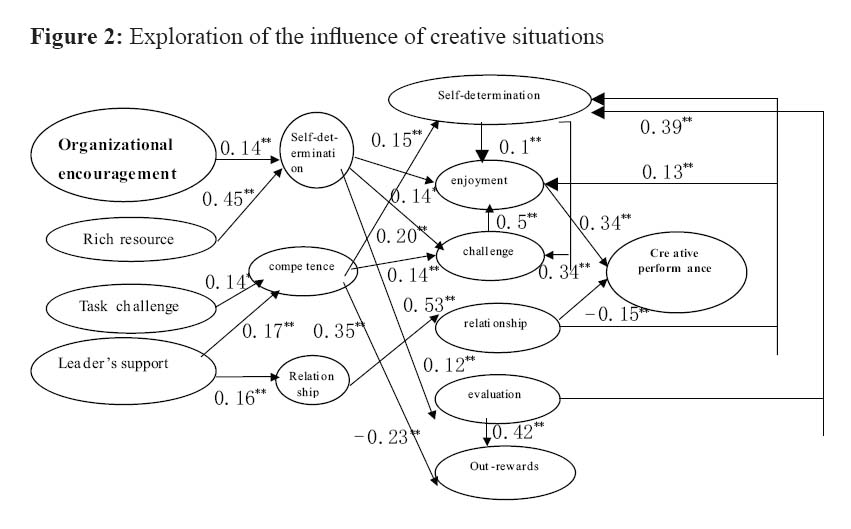 Table 2: Models of exploration and verification

Figure 3: Verification of the influence of creative situation 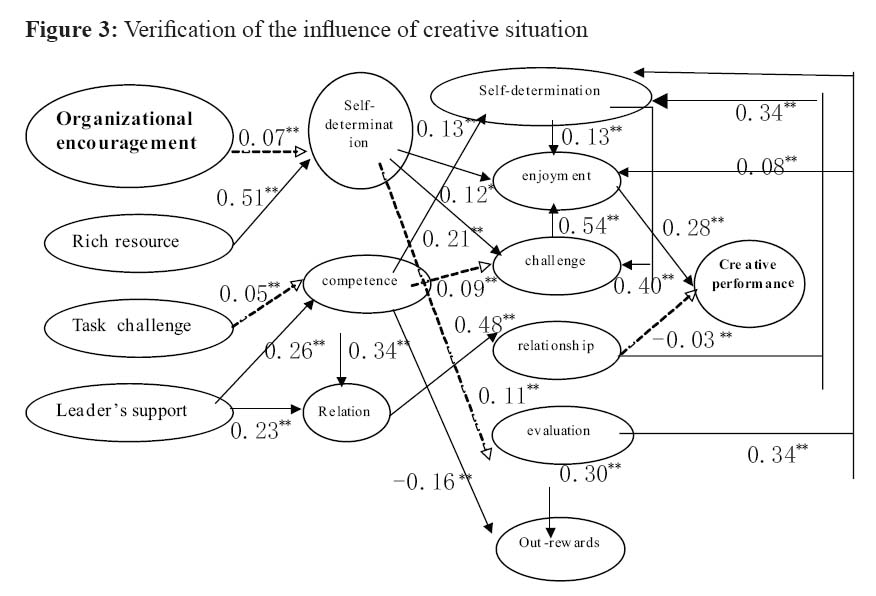 The model of needs and motivation as the mediator

16 Based on the organismic dialectical metatheory, a model for the influence of creative situations was constructed. The results show that it is accurate for the mediation of the needs and motivation between the creative situation and creative performance; and proves that organismic dialectical metatheory has great validity in the creative research field, which can produce meaningful guidance for creative encouragement in reality.

The relationship between creative situations and psychological needs

17 Combining the results of the exploration and verification research, the conclusion drawn is that, for Chinese enterprises, support from leaders and richness of resources are primary components in a creative situation. The factors that benefit creative behavior, such as richness of opportunity, abundant time, and adequate funds may make employees feel that in the company they are not restricted, producing the freedom of self-determination. Help and guidance from leaders may make the employees feel secured and satisfy the needs of the relationship. Such situations also satisfy the need of competence. But further research is still needed to confirm the contribution of organizational encouragement and task challenge, which may be the reason that innovation is very poor in the chosen enterprise. After all, the different factors in creative situations satisfy the different types of psychological needs. The transformation of creative situations should strengthen the features, which satisfies corresponding demands.

The relation between three kinds of psychological needs and work-motivation

The relationship between each component of work-motivation

The relationship between work-motivation and creative behavior

24 What deserves to be pointed out is that in the path model of exploration, good relation orientation and creative behavior presents a negative correlation of .05 significant levels. But in the model of verification, although this path does not reach significant levels, the path coefficient is a negative value. This shows that not all of the intrinsic motivation has positive effects on creative behavior. The pursuit of harmony in interpersonal relations may produce a negative influence on creative behavior. It reminds us that we must be cautious during the reformation of creative circumstances. When the organization emphasizes harmony and consistency excessively, it may be possible to produce a negative influence. For leading support, it is the most important to satisfy psychological needs. It should work by centering more on employees instead of taking the goal of establishing private relations. Otherwise it can produce a negative influence on the creativity of employees.

25 Based on the organismic dialectical metatheory, this study explores the relationship between creative situations and creative behavior systemically. The main findings are as follows: Firstly, the mediate model put forward by organismic dialectical metatheory is reasonable for creativity. Secondly, each situational factor has characteristics with different psychological needs. Thirdly, the degree of different kinds of needs satisfied is not consistent with this kind of motivation. Fourthly, the satisfaction of psychological needs improves non-material extrinsic motivation. Fifthly, the need for self-determination is a key factor. And lastly, the relationship between intrinsic and extrinsic motivation is more complicated than it is generally understood.

26 Based on the experiment, we put forward the following suggestions on the transformation of the creative environment in Chinese enterprises. Firstly, our activity should be directed to the goal of satisfying the needs of self-determination and competence. Besides offering rich resources and leading support, we should initiate and encourage self-determination. And we should add some content about democratic participation, and the like, into the design of the management systems such as organizational structure, rewards, and performance evaluation in order to promote the satisfaction of self-determination. Time-work redesign is also needed. We should increase the challenge and meaningfulness of work. Let employees experience a sense of competence. Secondly, we should increase human resource capital through recruitment and development. The more education employees get, the higher the desire for task challenges, and the easier it is for them to get enjoyment from work. Thus, it seems that having high quality employees is the most important approach to independent creativity in China. Thirdly, we should take arousing inner motivation as the main means in encouragement management, and take the external motivation of non-material forms as the assistance. We affirm that it would be unwise to encourage creativity using out-reward as a stimulant to encourage creativity in work. And if harmonious consistence in an organization is pursued too much, it may produce a negative influence on creativity.

Zhang, J. (2003). Research on the factor of creative situation in organization and the mechanism of its influence. memo.