Articles
Management of Eight ‘Ja’ for Economic Development of Nepal

1 Nepal has experienced no political stability so far, and has been engaged in political debate and turmoil for decades. The entrenchment of monarchy into feudalism became the major impediment to the economic development of Nepal. With the recent conclusion of the historic Constituent Assembly’s election and the abolition of the 240-year old institution of monarchy, Nepal is now yearning for new ways to modernize to catch up with the developed world. But it needs to develop a theoretically grounded economic development framework for sustainable development and economic transformation of the nation.

2 Just as Michael E. Porter (1998) proposed his four-diamond model for creating national competitive advantage of nations, I am going to propose a theoretical framework based on sustainable development and management of Eight "Ja"1─Nepali letter "Ja", Jal (water), Jamin (land), Jungle (forest), Jadibuti (medicinal and aromatic plants), Jansakti (manpower), Janawar (animals), Jarajuri (plants), and Jalabayu (climate) referred to as Asta-Ja2 in the Nepali language for economic development and management of Nepal. Nepal has tremendous opportunities for sustainably developing, managing, and utilizing Asta-Ja for economic development and uplifting the Nepalese economy from its current level to the level of one of the richest nations within a couple of decades. Economic transformation must undoubtedly address the basic necessities of education, health, and employment, and it must also contribute to the creation of an equitable, just, and sustainable society, and conserve and develop the natural resource-base for long-term sustainability and environmental quality. For a successful economic transformation, it is important to formulate policies and programs based on the competitive advantages, available opportunities, and resource-base of the nation. Economic activities that are locally managed and are distributed across the nation will enhance societal sustainability and promote national integrity.

3 It is important to assess each of these eight Jas (Asta-Ja) and evaluate them to see how much potential they have for economic development of the nation. Also, it is important to understand the interrelationships and linkages between and amongst these eight jas in relation to their sustainable development and management for economic transformation. To that end, the following sections discuss the Asta-Ja with respect to their current states and future potential, their interrelationships and linkages, and policy implications for economic development and management in Nepal.

4 Rivers and streams have great importance for industrial and drinking water supplies, irrigation, tourism, and hydro-electric projects. Nepal’s vast water resources include over 6,000 rivers and streams, many snow peaks, lakes, 3,252 glaciers, and 2,323 glacial lakes (Bhandari, 2002; Shrestha and Hisaki, 2007) and groundwater resources. Among the rivers of the first order are Saptakoshi, Saptagandaki and Karnali3. Some of the major rivers of the second order in Nepal are Mahakali, Babai, Rapti, Tinau, Bagmati, Kamala, Kankai, and Mechi.

7 The total land area of 14,748,000 hectares in Nepal (LRMP, 1986) consists of a spectacular landscape stretched from east to west. Based on Hagen (1960), Nepal includes seven physiographic zones: Terai, Siwalik Hills (including Chure Hills, Dun Valleys or Inner Terai such as Dang Valley, Chitwan Valley and Trijuga Valley), Mahabharat Lekh, Midlands (or Pahad), The Himalaya, High Mountain Valleys, and Tibetan Marginal Mountains (or Trans-Himalaya) ( RBGE, n.d.). Another commonly used physiographic classification system in Nepal is the three zone topographic classification system. Based on this system Nepal’s three physiographic regions include the Lowlands (Terai and Siwalik Hills), Mid-Hills (Mahabharat Lekh and Midlands), and Highlands (Himalayan Mountains, High Mountain Valleys, and Tibetan Marginal Mountains). Certainly, the seven zone physiographic classification system will be more useful in understanding and managing the Asta-Ja for economic development and management in Nepal. Nepal’s altitudes range from 60 m in Dhanusha to 8,848 m at the top of Mt. Everest, the highest peak in the world. The Mountains, Hills and Terai respectively contain 35, 42, and 23 % of the total area, and 7, 46, and 47 % of the population (Maltsoglou and Taniguchi, 2004). With the magnificent Himalayas, glaciers, enchanting landscapes, mountains and hills, rivers and streams, wildlife, valleys, lakes, incredible terraces, flat lands, having been the birth place of Lord Budha, and being inhabited by many ethnic groups and friendly and smiling people, Nepal is one of the most attractive countries in the world, and this can be developed into a major tourist destination. Fertile soils in the plains and valleys of Nepal can support intensive agricultural production, while sloping lands in the hills, mountains, and Himalayan belts can be effectively utilized for fruits, vegetables, pasture, and other agricultural activities. Nepal is also enriched with many minerals and mines such as limestone, iron, copper, slate, marble, lead, nickel, pyrite, and gold (Kuo, 1998; Bhandari, 2002). It is estimated that Phulchoki iron mine alone contains over 10 million tonnes of iron. There are 31 copper mines identified in the nation. Better surveying, mining, and utilization of these minerals, along with tourism promotion and development, and the sustainable utilization of land for agricultural production will effectively contribute to economic transformation in Nepal.

9 Nepal has a large livestock population. In 2003/2004, Nepal’s livestock population consisted of 6.96 million cattle (including yaks and hybrids), 3.95 million water buffalo, 0.82 million sheep, and 6.98 million goats (Pariyar, 2006). Overall, three out of four households in Nepal own livestock (Maltsoglou and Taniguchi, 2004), and livestock production is well-integrated into agricultural crop production systems. Nepal has a fairly well-established livestock trade with China, India and Bangladesh. Live animals, meat, milk and cream, natural honey, and animal fats are some of the major export items from Nepal (MOAC, 2008). Through better livestock (cows, water buffaloes, poultry, and pigs) development and marketing, export of animal products such as milk, eggs, meat, wool, hides, and skins can be increased significantly and contribute to agricultural development and economic transformation in Nepal. In addition, animals such as donkeys, mules, and horses are used as important draft, transport, and recreational animals. Aquaculture, bee keeping, and sericulture have high importance for industrial production and economic development.

12 Nepal occupies just 0.1% of the world’s total land mass, but contains an incredibly large number of plant species. In 2006, the total number of flowering plant species recorded from Nepal was 6,391 (2.76% of global totals), with 339 flowering plant species endemic to Nepal (Bhuju et al., 2007, p. XXiV). Among them, an appreciable number of plant species are identified and recorded as medicinal and aromatic plants. Some of the major medicinal and aromatic plants traded in and from Nepal include Aconitum heterophyllum (Atis), Aconitum spicatum (Bish), Bergenia spp. (Pakhanbed), Dioscorea deltoidea (Bhyakur), Epimerantha macraei (Jiwanti), Morchella spp. (Gucchi chyau), Nardostachys grandiflora (Jatamansi), Neopicrorhiza scrophulariiflora (Kutki), Rheum australe (Padamchal Amalbed), Silajeet (Olsen and Larsen, 2003), Cordyceps sinensis (Yarsagumba) (Devkota, 2006), Dactylorhiza hatagirea (Panchaule), and prickly ash (Timur). Other medicinal and aromatic plants commonly found in Nepal include swertia (Chiraito), Malabar nut (Asuro), jimbu, rudrachhe, cardamom, Ocimum sanctum (Tulsi), rauvolfia root (sarpagandga), Picrocarpus santalinus Linn (Ractachandan), Taxus baccata (Lothsalla), tejpat (Indian bay leaf), Butea frondasa (Amala), and Acacia catechu (Khair), and possess high commercial value. There may still be many more medicinal and aromatic plants that are yet to be known or recorded. The exports of medicinal and aromatic plant products is a trend that increases each year (Olsen and Larsen, 2003; Larsen, 2005; Olsen, 2005a). According to Olsen (2005b), Nepalese exports of medicinal plant material in 1997/1998 accounted to 14,460 tonnes of dried material at a value of 16 million US dollars. Identification, conservation, sustainable utilization, and efficient marketing of medicinal and aromatic plants will contribute remarkably to the sustainable economic development and management of the nation.

13 Climate is the major factor that impacts the natural resource base such as biodiversity, forest types, wild animals, water resources, soils, ecology, and agricultural production of a nation. Where there is extreme climate, agricultural development is difficult, whereas a favorable climate supports a fast-paced agricultural development. According to Bhandari (2002), Nepal contains six different types of climate: Tropical Monsoon Climate, Subtropical Monsoon Climate, Warm Temperate Monsoon Climate, Cool Temperate Climate, Alpine Climate, and Tundra or Arctic Climate. Within these broad climatic zones, there exists a great variety of micro climatic conditions resulting in diversity of vegetation, wildlife, landuse types, and land management practices. This climatic and microclimatic condition offers competitive advantages in year-round production of high value crops such as fruits, vegetables, cash crops, cut flowers, vegetable seeds, spice crops, livestock, and other agro-based products in Nepal. Thus, Nepal has the opportunity to export surplus agricultural produce to other countries during the off-season and, fetching premium prices. Also, climate has historically been one of the major considerations when establishing settlements in Nepal, as agricultural production and health issues are related to climatic conditions. The mid-hills, where beautiful vistas and pleasant weather prevails throughout the year, may attract many theme parks, hill resorts, and retirement homes. For example, retirement communities for foreigners as in Malaysia and Thailand can be developed. It is a huge privilege for Nepalese to have a country with such a variety of climatic zones that range from Tropical in the Terai to Alpine and Tundra in the Himalayan region, and having enermous opportunity for economic development of the nation. 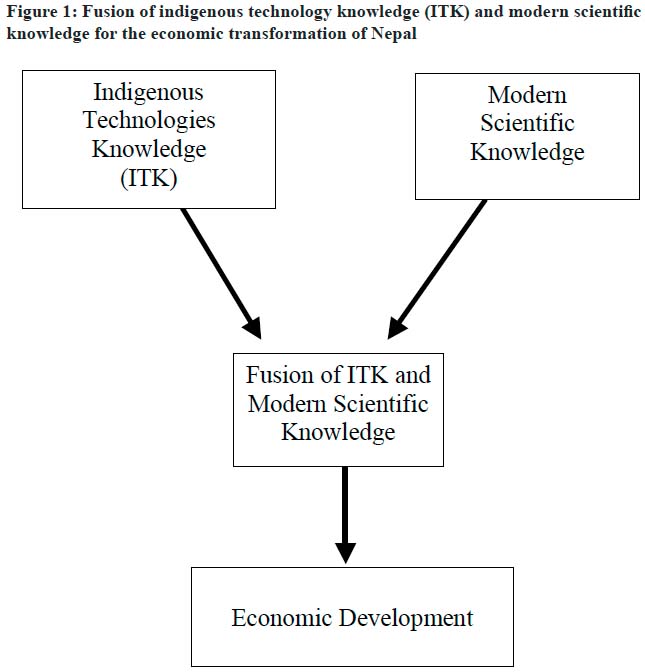 Figure 2: Interrelationships and linkages among Asta-Ja, and the formulation of national policies and programs for economic transformation 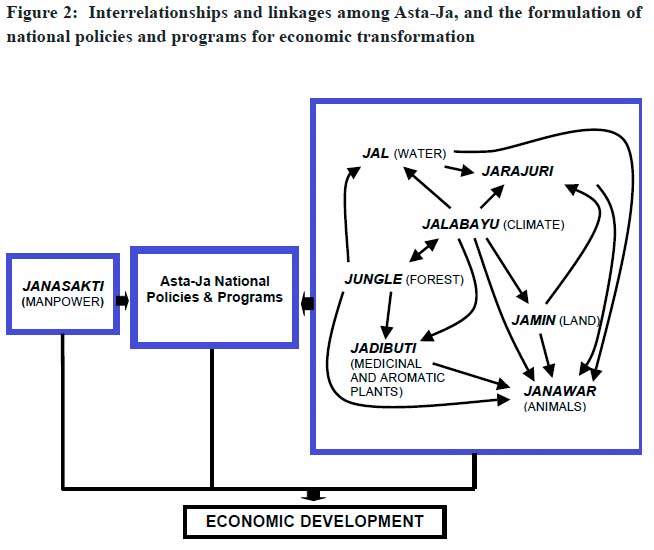 16 A nationwide, scientific, and sustained Asta-Ja monitoring program aimed at understanding the magnitude and status, properties, ecology and environment, sustainable utilization and management, and linkages and interrelationships between and amongst Asta-Ja is critical for economic development. Effective data generation, handling, archival, retrieval and update systems should be in place. As depicted in figure 2, national Asta-Ja policies and programs for economic transformation should be developed based on scientific understanding of this natural resource-base and considering the availability of JANASAKTI (manpower). It is important to formulate national policies based on ground realities, public involvement, competitive advantages, and global considerations. Government should have sufficient provisions for building confidence among investors for expedited economic development. Effective program implementation and evaluation is necessary for success. As empowering everyone to strive for the best results in every aspect of business is the mantra for the success of a business (Sharma, 1999), all stakeholders, communities, participating agencies, governmental institutions, the public, and those involved in the development and management of Asta-Ja and economic transformation of Nepal should be sufficiently empowered for success.

17 The Eight "Ja" (Asta-Ja) framework for economic development and management of Nepal is in line with other historic "asta" frameworks such as astamangals, astangika-marga, and asta-Laxmi, which have been the ideals in Sanskrit as well as in Nepali language and are well-rooted into Nepalese society. The Asta-Ja framework, while being well-established in Nepalese society, will be the icon of economic transformation in Nepal. Through this framework, Nepal can sustainably manage, conserve, harness, and utilize her tremendous amount of natural resources, achieve fast-paced economic development, built a sustainable, equitable, and just society, and enhance environmental quality. Of course, further research exploring various dimensions of each of the Asta-Jas is urgently needed to make the proposed framework more useful to policy makers.

MOAC (Ministry of Agriculture and Cooperatives), Government of Nepal. (2008). Exports to overseas countries 2006/2007, Statistics, at http://www.moac.gov.np/home/statistics.php.

Sharma, B. (1999). Distinguishing the Best from the Rest. Journal of Comparative International Management, 2(1): 3-8.