Articles
Do Ownership and Culture Matter to Joint Venture Success?*

Previous studies show that equity structure and cultural differences are important factors that influence the performance of joint ventures (JVs). Based on the JVs contract database and Import/Export ranking database the analysis shows that the performance of monopoly controlled JVs is better than others. However, cultural differences do not hinder performance; in fact, heterogeneity has provided better outcomes in JVs. Based on grouped data samples, it is believed that the higher the ratio of Chinese equity in JVs, the better the export performance. However, the relation between foreign equity and import orientation is not significant.

2 In recent years, cultural differences have been used to explain the success rate of joint ventures (Child, 1994; Neelankavil, Mathur and Zhang, 2000). But the conclusions drawn from these studies are inconsistent. Thus, it is necessary to examine the relationship between cultural differences and the success of joint ventures (Gibson, Zellmer-Bruhn and Schwab, 2003). Studies that have been done in the context of China in this area have often been based on the information provided in the Almanac of China’s Foreign Economic Relations and Trade. However, the yearbook has not published any information about joint ventures since 1997. Hence the data base of the study is limited to what was published before 1996 (Pan, 1997; Chadee, Qiu and Rose, 2003). A few studies were conducted using questionnaire surveys in certain regions of the country. But it is difficult to guarantee the objectivity and comprehensiveness of the conclusions due to sampling bias (Zhao, 2002; Zhou and Tse, 2002). Some other studies are mostly descriptive and focus on the comparison of the cross-cultural practices. They lacked convincing examples though.

3 For the purpose of this study, a new data set about joint ventures was prepared, and the internal relationship between share ownership structure and business success was examined in support of the Killing theory postulated for joint ventures in developing countries. Hypotheses posited for empirical tests and the rationale are presented next.

5 Partners of the Chinese-foreign joint ventures have different strategies. The objectives of the Chinese partners are usually to earn foreign exchange through exporting new products, learn advanced management and technologies from foreign partners and obtain the independent manufacturing ability without import as quickly as possible. In contrast, the foreign partners usually focus on grabbing the Chinese market so as to increase profits and market share. As a part of their global strategy, the foreign partners will usually not put all of the manufacturing process in China. They will try to procure the parts and materials from abroad within the scope given by policies and contracts so as to ensure the high quality of products and maximize their profits through tax transfer. Whether a partner’s strategic tendency will be accepted by the Board of Directors depends on how strong this partner’s management control power is, of which the most important element is share ownership structure. Therefore, we may deduce the following hypothesis:

Hypothesis 2A: The greater the share ownership a foreign partner of a Chinese-foreign joint venture possesses, the better the import performance the joint venture will have.

Hypothesis 2B: The greater the share ownership a Chinese partner of a Chinese-foreign joint venture has, the better the export performance the joint venture will give.

8 Cultural differences have a strong influence on the business achievements of joint ventures (Shenkar and Zeira, 1982). They have been shown in areas such as work values (England, 1975), knowledge framework (Lord and Foti, 1986), physical appearance and conduct (Gudykunst and Ting-Toomey, 1988) and language (Church, 1982). The cultural differences are not limited to the variety of cultural backgrounds of the individuals in a management group, but also can be more precisely demonstrated through the concept of cultural distance (Hambrick, Davision and Scott, 1998). Generally, the greater the cultural differences were, the more difficult it was for the group members to communicate and the more unfavorable it was for the organization’s success (Blau and Deb, 1977). Group members with different cultural backgrounds had different ideas about conflicts and solutions to the conflicts (Hofstede, 1993) and a heterogeneous group might face fiercer organizational clashes.

Hypothesis 3: The greater the cultural differences in a joint venture are, the worse the overall achievements of the joint venture will be.

11 In order to obtain background information about these foreign invested enterprises, a unique "Database of Joint Venture Contracts" was established. For the convenience of the following analysis, the wholly owned foreign enterprises were taken as special cases and considered them as the joint ventures with 100% foreign investment (for 10,075 joint ventures established between 1979 and 2005). The information about these enterprises from 1979 to 1996 is from the Almanac of China’s Foreign Economic Relations and Trade. The yearbook was compiled and published by the Ministry of Commerce of China (formerly the Ministry of Foreign Trade and Economy), including basic entries of joint ventures such as total investment, registered capital, proportions of foreign ownership, time period of joint operation, names of Chinese and foreign partners, nations/regions, selected sites in China and the scopes of business. The information from 1997 to 2005 is from publications such as China Business Review and Business China. The amount of work was huge and six researchers were involved for 14 months. Both the China Business Review and Business China are published in English and all of the information from 1997 to 2005 was carefully translated. In order to make the translated names as accurate as possible, they were repeatedly checked with networks and publications with any missing information filled in as accurately as possible. After deleting all the incomplete entries, we assorted and encoded the information. For example, we used two-digit area codes for the locations of enterprises, Country/region codes (ISO) for foreign countries/regions and industrial codes (SIC) for the scope of business. The database used in this study is a combination of the "Database of Joint Venture Contracts" and the "Database of Import and Export Ranking" with a rule of matching the enterprises’ names.

12 Based on the combined database, the main variables for the study are as follows:

13 Besides the investment amounts, dummy variables were devised in the beginning to control the effect of years. However, the results show that years do not affect the relationship between the ranking and variables. That is to say, that the effect of time may be disregarded. Based on the hypotheses discussed earlier, a framework for depicting the relationships among and between variables is shown in Fig. 1:

14 The above hypothesized relationships have been examined using the SAS software for data analysis.

15 In Model 1, the correlation between the dependent variable (GR) and the control variable (investment amount) is examined. Table 1 shows that the greater the investment amount, the higher the position an enterprise will have in the ranking. The relevance is very clear.

17 In Model 3, the correlation between the dependent variable (GR) and independent variable (cultural distance) is examined. It may be seen that the greater the cultural distance, the higher the position an enterprise will have in the ranking. The results fail to support Hypothesis 3. That is to say, the greater the cultural distance between the two partners in a joint venture, the better the business success of the venture. Therefore the following two propositions for better business success with greater cultural distance in a foreign-Chinese joint venture are proposed. On the one hand, a joint venture culture includes organizational culture and social culture that can all affect the success of the organization. According to surveys conducted by Pothukuchi, Damonpour and Choi, et al (2002), the heterogeneity of the organizational culture has more apparent impact on the organization’s achievements than the heterogeneity of the social culture. Those countries with greater distance from the Chinese culture are mainly the Western developed countries, usually with higher management and technical levels and high performing organizational cultures. On the other hand, some scholars believe that the cultural heterogeneity is good for a joint venture because a group with heterogeneity has more diversity and stronger organizational ability than a group with homogeneity (Larkey, 1996). After more than 40 years’ study, Sundstrom, Meuse and Futrell (1990) are convinced that a heterogeneous group usually performs much better than a homogeneous group in solving complex problems creatively. 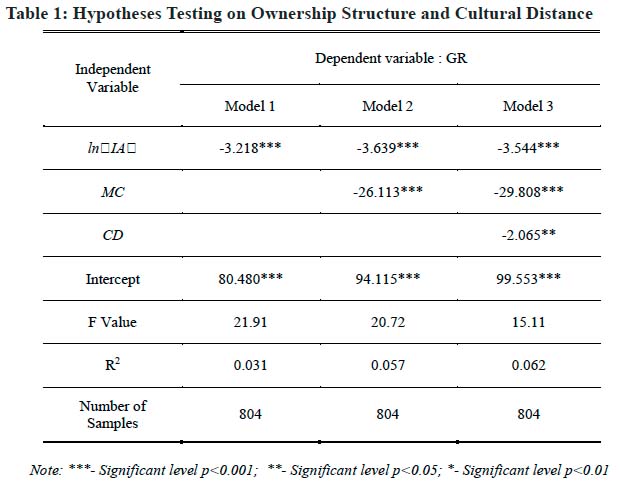 18 In order to examine the potential relationship between the foreign share ownership and the import or export orientation of a joint venture, the sample enterprises were divided into two categories: import and export, and two groups of patterns were established as shown below:

20 In Model 1, the correlation between the dependent variable (export ranking) and independent variable (foreign ownership) is examined. Table 2 shows that, the higher the proportion of Chinese ownership, the higher the position an enterprise will take in export ranking. Hence, Hypothesis 2B is supported. With the influence of traditional Confucianism, the Chinese managerial personnel in joint ventures usually place more importance on the "loyalty" and "honor" of their country and nation than to safeguarding their enterprises’ interests. Therefore, they (including some local government officials) usually set the amount of foreign exchange they have earned through export as the criterion for a successful joint venture. In a joint venture controlled by the Chinese party, product export will become an important objective for its strategy.

Table 2: Results of Examining the Hypotheses on the Foreign Share Ownership 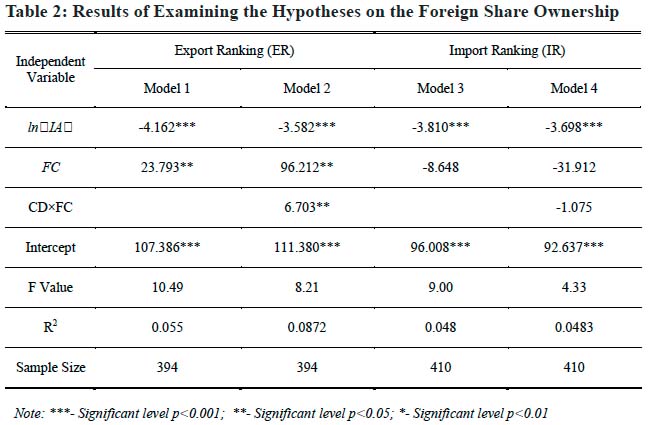 22 In Model 3, the correlation between the dependent variable (import ranking) and independent variable (foreign share ownership) is examined. It may be seen that a high proportion of foreign ownership will not necessarily guarantee a better position in the import ranking. Their relevance is not obvious. There are many factors that influence a joint venture in selecting an import strategy. Besides the customs barrier, the bureaucracy examining and approving system for importing commodities and the inconveniences derived from the planned economy (such as designating a seller of specific products and monopolizing the purchase and distribution) will also reduce the import efficiency. As a result, there will be no correlation between foreign shares and import strategies.

23 In Model 4, the correlation between the dependent variable (import ranking) and the interaction between cultural distance and foreign ownership is examined. It may be seen that the relevance is not clear.

24 Using the Database of Joint Venture Contracts and the Database of Import and Export Ranking, this article has analyzed the impact of share ownership structure and cultural distance on the business success of joint ventures in China. The results show that the higher the proportion of Chinese ownership, the more an enterprise will lean toward adopting an export strategy and the higher the position it will take in export ranking. The more an enterprise is characterized by a monopoly-controlled ownership structure, the better its general success will be. Thus, the findings of this study are in line with Killing’s conclusion about the developed market environment. Since cultural heterogeneity is good for decision quality, the greater the cultural distance, the better the business success of a Chinese-foreign joint venture. The findings of this study not only provide a deeper understanding of the discrepancies in the objectives of both parties of a Chinese-foreign joint venture, but also provide a deeper explanation for strategic choices prompted by such discrepancies. These conclusions have instructional value for making appropriate policies on introducing foreign capital and management and are also good for fully excavating foreign invested enterprises’ abilities and encouraging them to play active role in China’s economic construction.

Zhao, Jinghua. 2002. Study on Strategic Objectives of the Subordinating Company of JVs in China (in Chinese). Economic and Managerial Press : Beijing.

* Funds for this study were provided by the Natural Science Foundation of China (NSFC, 70372032), the Program for New Century Excellent Talents in University (NCET-06-0804), and the UESTC Program for Training the Outstanding Young and Middle-Aged Scholars.