Reviews
Dry Store Room No. 1:
The Secret Life of the Natural History Museum

1 As part of the celebrations for the Royal Alberta Museum’s fortieth anniversary in 2007, I was involved in developing a small exhibition highlighting some significant events and achievements of the previous four decades. My research into the Museum and its history made me acutely aware that much of this tradition is carried in the minds and memories of my fellow workers and is never written down. Perhaps because of this experience, Richard Fortey’s eminently readable book about the history of the Natural History Museum (NHM), London, strongly appealed to me.

2 Well known for his earlier, well-received, books on palaeontology and earth sciences, Fortey now turns his acute intelligence and observant eyes on his own workplace. He provides us with an enjoyable and informative behind-the-scenes tour of the curatorial departments. Having spent his professional career working in the Museum, Fortey considers himself well qualified to write about the place. He starts from a profound belief in the importance of museums and a conviction that "the people who work out of sight are what keep a museum alive". This is not a sanitized official history but, as he says, stories from the shop floor, featuring the kind of institutional memory and folklore that established staffers pass along to newbies, and which form part of the institution’s tradition. Fortey gathers up and tells stories about some eccentric characters who have worked or still work for the NHM. Of course his own department, palaeontology, gets considerable attention but he also introduces us to specialists from other disciplines, including botany, entomology, zoology and mineralogy. Amusing anecdotes about bizarre characters can too easily turn into "you had to be there" accounts, only understandable and funny if you actually know the people. Fortey gracefully sidesteps this pitfall. He situates these unconventional personalities within the continuous stream of knowledge and research built around the Museum’s collections, from diamonds to Diptera, diatoms to dodos. He emphasizes the scholars’ research contributions and the scientific value of their work as well as their peculiarities. "Their motivation", he believes, "is an unquenchable instinct to find things out and to make those discoveries known to others". However, this is not simply an account of some eccentrics. If this were all, the book would be no more than an amusing and irrelevant oddity. Fortey, however, takes this further as he examines the significance and purpose of museums in general. From this perspective, the NHM can be regarded as simply a case study.

3 In fact, his book has a more serious intention: to advocate for museums. Amongst the jokes and anecdotes, Fortey presents a well-argued case for the value of museums and their collections. Museums, he maintains, are places "where the visitor can come to examine evidence, as well as to be diverted". The amount of evidence is impressive; Fortey estimates the NHM’s collections at 80 million specimens. He provides examples of the importance of collections, together with the taxonomists who classify them and the scientists who study them. Collections, declares Fortey, "defy time; they transcend what any one scholar might make of them; they are outside our own little personal histories". Fortey shows how specimens can be re-examined and re-interpreted by successive generations of experts, yielding new insights each time, as for NHM’s famous specimen of Archaeopteryx. Fortey concentrates on perhaps the Museum’s main functions, taxonomy, the naming of names, and systematics, the often slow and painstaking elucidation of the characteristics of, and relationships between, organisms. This work is unglamorous; sometimes, as Fortey remarks, it is dismissed as "counting hairs on legs". Yet it is fundamental to all biosciences, including palaeontology. New species are being discovered all the time and we only know they are new by consulting the archive of known and described species. As Fortey points out, in some groups, such as beetles and fungi, millions of species remain to be described and named. Further, Fortey notes the urgency of this task; documenting the world’s biodiversity is critical in the light of increasing extinction rates. Although the whole organism is still the fundamental unit of study, especially for elucidating structures and behaviour, Fortey acknowledges the undoubted advances in molecular studies in recent years, and their value in unravelling knotty taxonomic conundrums. He illustrates this with a compelling but complicated example from truffle taxonomy. Cladistics is discussed too. Lest one should think of taxonomy as sterile and irrelevant, Fortey presents examples of its practical implications, including research towards the eradication of diseases such as bilharzia, the control of harmful insect pests, and development of more productive agricultural crops. The impacts of this work can be far-reaching. 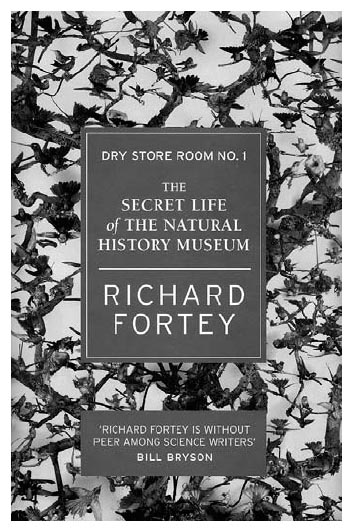 4 Museums have not been immune to the upheavals and dislocations consequent upon social and economic changes in recent years. Fortey documents their impact on the NHM, especially the imposition of a business model of operation, and the resulting reorganization and staff cuts. This model often requires justification of research in terms of immediate benefits, which militates against the "research for its own sake" ethos. Fortey is clearly at odds with the new system; he presents several examples of unanticipated benefits resulting from curatorial work that was driven solely by scientific curiosity. Perhaps the most surprising is the discovery of a lost Mozart manuscript by a researcher looking for illustrations of herring. Fortey also describes the tensions between the front of house (exhibitions and public areas) and back of house areas (collections and research labs) and the increasing staff numbers being allocated to marketing and fund raising, rather than curatorial work and research. Galleries, exhibitions, and outreach get limited discussion, although Fortey recognizes changing public expectations for museums through the years. He touches only briefly on his experience in gallery development. Evidently, there is another book to be written about this aspect of museum work, in which curators are often heavily involved. However, here the focus is firmly on the back of house activities. Fortey notes, with perhaps a certain amount of regret, the increasing lack of tolerance for eccentricity or, with less regret, for non-productivity. He also describes every curator’s worst nightmare: rogues in the museum, or people who gain positions of trust and then steal specimens. Thankfully, Fortey concentrates more on the positive and contributory aspects of the passion for collections.

5 I found myself cheering, chuckling and smiling wryly at many places in this book. It is hugely entertaining. True, it could be classified as a gentle polemic or as self-justification. Special pleading? Well, perhaps. Some of the situations Fortey describes are particular to museums. Yet his "tell it like it is" account of museum life includes much that will be familiar to anyone who has ever worked in a similar large institution or organization, such as a university or geological survey. His discussion is wide-ranging, persuasive, thought provoking, and lucid. As a curator myself, I certainly agree with Fortey that museums are special places. Now, thanks to Fortey’s splendid portrayal, the pleasures and implications of museum work can be widely shared. I highly recommend his book to my colleagues in geoscience.