1 From October 19–26th, 2007, over 500 delegates from 20 countries met to discuss the state of the environment with respect to mining. This quadrennial international conference, fourth since 1995, was co-chaired by Graeme Spiers (Centre for Environmental Monitoring) and John Gunn (Cooperative Freshwater Ecology Unit) of Laurentian University. In all, there were about 175 oral and poster presentations as well as a reasonably large Trade Show (> 40 companies). The conference was sponsored by CVRD Inco with additional support from many other mining companies, consulting firms, and various levels of government. The organizers also co-hosted about 50 to 60 high-school students and judged some of their presentations. In addition, the conference organizers promoted a "green" theme by allowing delegates to contribute $25 toward the purchase of trees that were planted during the conference, to offset "our" carbon emissions. Several eager participants went out during the ice breaker reception to plant trees on the university campus.

2 Each morning the conference opened with a plenary session, followed by four concurrent sessions on Days 1 and 2, and three on Day 3. There were three symposia (Northern European, Mining Water, and Risk Assessment) and 18 thematic special sessions focused on mine reclamation, remediation, risk assessment, abiotic and biotic processes, and various specific mining camps.

3 David Schindler, the first plenary speaker, hails from the Department of Biological Sciences, University of Alberta. His talk entitled, "Runningout of Steam: The Environmental Impacts of Oil Sands Mining" put energy, greenhouse gases (GHG) and water into a societal context. His concerns focused on the volume and quality of water downstream of the tar sands sites, where thousands of people live and rely on the water resources. To mine the tar sands, it takes from 2 to 5 barrels of water and 500 to 1000 ft3 of natural gas to extract 1 barrel of oil. Greenhouse gases currently are 40 000 000 tonnes per year (CO2 equivalent) and are estimated to double by 2011. The tar sands area is currently the second largest emitter of GHGs in Canada and soon will be the largest; it is already the largest acid deposition source in the world. Schindler estimates that by 2020, 15% of the Athabasca River water would be used for tar sands processing. Only 8% of the used water is returned to the river; the remaining 92% of the water is directed to large tailings ponds that currently span over 50 km2.Dr. Schindler demonstrated that the removal of large quantities of water from the Athabasca River produces negative effects on fish and other organisms, navigation, and wetlands downstream of the mining activity. His message was that considerable scientific and technological efforts are required to reduce the environmental consequences of what is currently a "most unsustainable development".

4 Following the plenary talk, the conference broke into several thematic sessions in the morning and afternoon, including: Northern European symposium (Sweden); Acid Rock Drainage/Acid Mine Drainage (ARD/AMD): Microbial Applications; Management Planning, Mining Water Symposium: Monitoring and Assessment; International Smelter Lands (Kola); Extractive Chemical Applications; and Sustainability. At the end of Day 1, a Symposium/Panel Discussion was convened to examine "Long Term Environmental Monitoring: A prerequisite for Sustainability". Three invited speakers, Bill Keller (Ontario Ministry of the Environment), David Schindler and Gordon Miller (Ontario Environmental Commissioner) were able to keep the audience’s rapt attention. Keller (Long-Term Environmental Monitoring: Nice or Necessary?) suggested that longterm monitoring has been criticized for not being "serious" science and too costly, but in reality he believed it could be cost effective due to recent scientific advances. He emphasised this using examples from 4 case studies of lakes in northern Ontario. Schindler’s talk (Canada’s Need for Monitoring) was more "tongue in cheek", using funny analogies to bolster and support his message. Miller spoke on the importance of monitoring in Ontario as a baseline with which to evaluate our environmental actions, and the difficulty in convincing politicians of its necessity. He pointed out the progress that has been made during his term as Commissioner and the challenges ahead.

5 On Day 2, a plenary talk by Bernd Lottermoser (James Cook University, Australia) provided a different perspective on Mining Environments (The Good, The Bad and The Ugly). He pointed out the advances, gaps and challenges in our knowledge on how to manage mining sites through several examples (Good: Rio Tinto, Spain; Bad: Mary Kathleen, Radium Hill, Australia; Ugly: Red Dome, Australia and Horn Island, Papua New Guinea). He proposed that Rio Tinto could be considered the birthplace of ARD research, as Diego Delgado in 1556 was the first to observe and document (in a letter to King Felipe II) the ARD products and their impact. Even after 400+ years of observation, Lottermoser noted that we need to dramatically improve our scientific understanding and environmental efforts. Remediation of mine sites using best practices must be improved through the continued search for innovative, sustainable, and cost-effective technologies. The plenary was followed by thematic sessions on: Sudbury (Abiotic and Biotic), Spectroscopic Chemical Applications, Erosion/Climate Change, Mining Water Symposium (Monitoring and Assessment), Sludge/Waste Rock, Mining in Extreme Environments-The North, Adaptations and Responses to Metal Stress, Acid Tailings, Passive Treatment/Soil and Agriculture, World Experience, and Assessment and Management Options.

6 On Day 3, the plenary opened with a talk by Peter Chapman (Golder Associates) entitled, "Environmental Risks of Inorganic Metals and Metalloids: A Continuing, Evolving Scientific Odyssey". Chapman discussed how information regarding inorganic contaminants addresses key questions about accumulation, metabolism and adverse effects and impacts on biota and populations. These issues are important in performing ecological risk assessments (ERA), as we need to determine bio-availability, bio-accessibility, bio-absorption, bio-reactivity and biological tolerance locally (site-specific) and in the context of the ‘bigger picture’. The plenary was followed by sessions on Timmins Mining Camp, Historical/Phytoremediation, Risk Assessment Symposium, Cobalt Mining Camp, ARD/AMD, Water Quality and Organic Substrates/Wetlands.

7 The Conference banquet was held at the Caruso Club and featured Jeffrey Simpson (Globe & Mail columnist and co-author of "Hot Air: Meeting Canada’s Climate Change Challenge") as the keynote speaker. Mr. Simpson gave a very entertaining and thoughtprovoking talk and the audience was certainly appreciative of his off-hand comments regarding politicians’ viewpoints on climate change and their collective lack of action. At the close of the banquet several students were given awards for their oral and poster presentations. For oral presentations, first place went to Nadia Mykytczuk, second to Ashley Tremblay, and third to Wijdan Malik. Winners of best posters were Dan-Yi Yang (first), Nicole Ferguson (first), Lisa St. Denis (second), and Christine Cousins (third). All award winners were students at Laurentian University.

8 Seven pre-meeting, half-day short courses were offered at the conference. Five of these were presented by industry and two by government. The industry-sponsored courses examined technologies useful in treatment and remediation from anaerobic technologies to erosion control. The government-sponsored courses focused on mine drainage, treatment and mine closure plans. In addition, the Cooperative Freshwater Ecological Unit of Laurentian University offered a twoday certification course in Benthos Bio-monitoring.

9 The conference included three field trips: 1) a pre-meeting one-day trip to CVRD-Inco and Xstrata to examine their environmental management practices; 2) a half-day trip to tour the Sudbury watershed, offered on two days concurrently with the short courses; and 3) a post-meeting two-day trip to visit northern Ontario mines; one of us (JBP) attended the field trip and another (CDD) was a field trip leader.

10 The northern Ontario Mine Tour was aimed at introducing two mining camps, Timmins and Cobalt, and the remediation work that is ongoing. In Timmins, the international group of participants (20, including attendees from South Africa, Australia and Japan) visited Kam Kotia Mine, Coniaurum Mine, Xstrata’s Kidd Creek metallurgical plant and various subsidence sites. The Little Kam River now boasts a pH of 5 (6 in the summer) in contrast with its pH 3 of the past. The expectation is the lime plant will function for at least 50 years, possibly longer if sites have not been fully rehabilitated. Costs to date are about $47 M. Tailings impoundment re-vegetation is well underway at the Coniaurum Mine. The site was contoured, geotextiles were installed along ditches to allow collection of runoff, and wood pulp by-product was placed on top of the tailings to serve as a growth medium. To date, the re-vegetation efforts have proven successful (Fig. 1). At the Kidd Creek metallurgical plant the participants were able to drive around the extensive tailings impoundment where thickened tailings are deposited into a large site. Currently the impoundment holds 100 M tonnes and the method precludes the use of dams, dikes or other containment structures.

11 The recent development of subsidence sites (sinkholes) are a testimony to the legacy of mining in Timmins and Cobalt. Collapse of the thin and weak crown pillars from the uppermost underground mining have become a hazard in some areas due to the lack of backfill support, especially because development of the surface lands continues to expand over the abandoned mine workings.

12 In the Cobalt camp, participants visited many of the historical sites along the Silver Heritage Trail such as the Nipissing Low Grade Mill site, Right-of-Way Mine and a brief tour into the Colonial Mine. A visit to the local mine museum and visitor centre was a must and participants were able to view videos on the history of this camp, the birthplace of underground mining in Canada. In addition to learning about the extent of some of the environmental problems in the Cobalt area, and the underlying sources, representatives from teh local Health Unit and the Ontario Ministry of the Environment described ongoing efforts to ensure the safety of local residents and visitors to the Cobalt area. Participants also learned about current remediation efforts.

13 In addition to our quick tour, our international visitors were able to visit a small wildlife park (Cedar Meadows Resort, Timmins) and pet Aggie the moose (Fig. 2), a treat for even the Canadians on the trip. 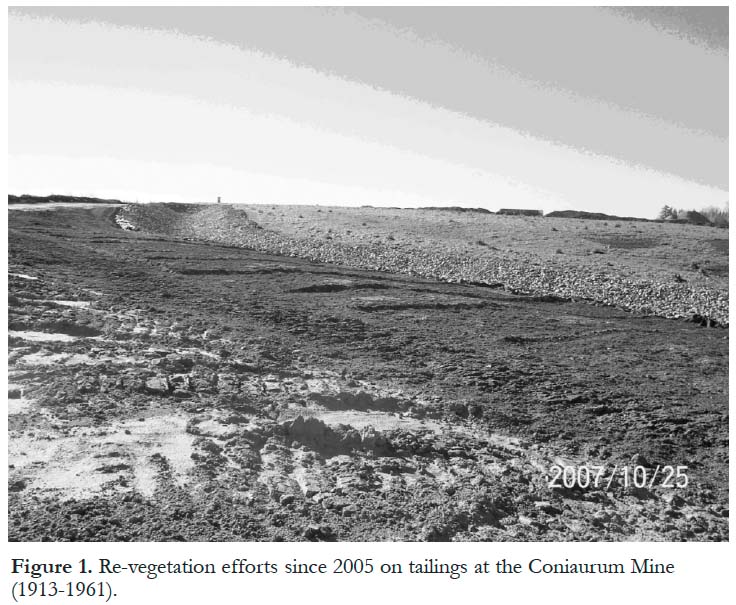 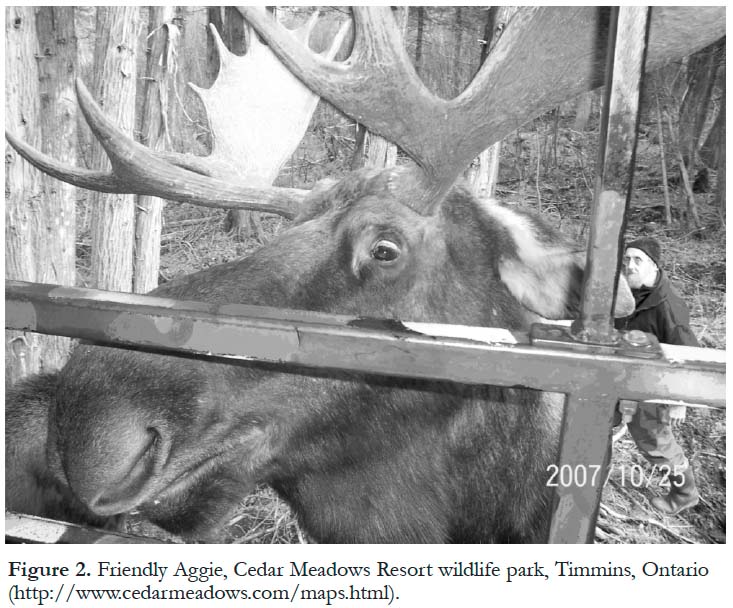